Who has a friend with the unspiritual gift of interrupting?

Now that you’ve thought of someone…is it possible that you…you are that person?

Some of us need to remind ourselves to listen, not interject, pause, wait, then…speak.

“Be quick to listen and slow to speak”  Amazing advice from James 1.
(more on this in our summer series, Proverbs)

This post is not about learning how to be polite in our conversations as good listeners.

Rather, today is about interruptions, how we deal with them, what we learn from and through them, and…why God wants to be and needs to be in the middle of our interruptions.

Interruptions are awesome when…

Interruptions are not so good when…

I racked my brain to think about stories, mine or others, where interruptions turned out to be good. The reality is, those happenings are subtle, almost unnoticeable, unless we make them such.

What if…we viewed interruptions as opportunities…

Because really, it’s not about the interruption, but how we view it, an use it.

“God is in the business of interruptions” 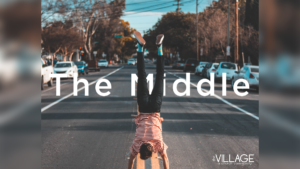 This is true in 2 ways:
– God sends them our way.
– We invite God to be in the middle of them.

In Acts 9, we read about God interrupting of Paul’s life. So much of an interruption that his life and name changed after this crazy and mysterious moment in his life.

Meanwhile, Saul was still breathing out murderous threats against the Lord’s disciples. He went to the high priest and asked him for letters to the synagogues in Damascus, so that if he found any there who belonged to the Way, whether men or women, he might take them as prisoners to Jerusalem.

As he neared Damascus on his journey, suddenly a light from heaven flashed around him. He fell to the ground and heard a voice say to him, “Saul, Saul, why do you persecute me?”
“Who are you, Lord?” Saul asked.
“I am Jesus, whom you are persecuting,” he replied. “Now get up and go into the city, and you will be told what you must do.”

The men travelling with Saul stood there speechless; they heard the sound but did not see anyone.  Saul got up from the ground, but when he opened his eyes he could see nothing. So they led him by the hand into Damascus. For three days he was blind, and did not eat or drink anything.

In Damascus there was a disciple named Ananias. The Lord called to him in a vision, “Ananias!”
“Yes, Lord,” he answered.
The Lord told him, “Go to the house of Judas on Straight Street and ask for a man from Tarsus named Saul, for he is praying. In a vision he has seen a man named Ananias come and place his hands on him to restore his sight.”
“Lord,” Ananias answered, “I have heard many reports about this man and all the harm he has done to your holy people in Jerusalem. And he has come here with authority from the chief priests to arrest all who call on your name.”

But the Lord said to Ananias, “Go! This man is my chosen instrument to proclaim my name to the Gentiles and their kings and to the people of Israel. I will show him how much he must suffer for my name.”
Then Ananias went to the house and entered it. Placing his hands on Saul, he said, “Brother Saul, the Lord—Jesus, who appeared to you on the road as you were coming here—has sent me so that you may see again and be filled with the Holy Spirit.”  Immediately, something like scales fell from Saul’s eyes, and he could see again. He got up and was baptized, and after taking some food, he regained his strength.

ALL BECAUSE OF AN INTERRUPTION

It’s never about if you’ll be interrupted, but will you let God use that interruption to make you better, to stretch you, to teach you?

Interruptions can give or teach you about…

If we truly want to be used by God, we need to be interruptible.

I believe that God is in the business of Interruptions. Do you?

This will be true in 2 ways:
– We believe that God sends them our way.
– We invite God to be in the middle of them.

What we view as an interruption, God can use as an opportunity.

Don’t ever waste an interruption.

God is in the middle of our interruptions…at least he can be, if we let him.

(This morning’s gathering was appropriately interrupted by a fire alarm:) 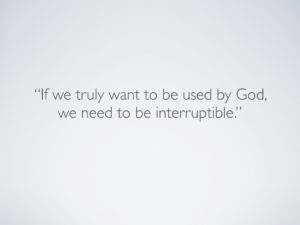 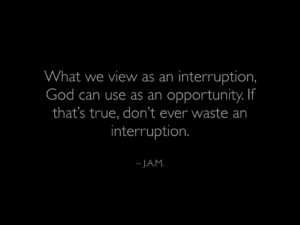