We started this morning’s talk with a musical rendition of Roxanne. Do you know it? Have you heard it? An old Police/Sting classic that still gets lots of radio play after all these years. If you’re wondering why, it’s because the lyrics touch some deep spots in our hearts, even if we’re not sure why? The song is about, you guessed it, a prostitute. But it’s more than that. The male character in this song is doing his best to call this woman out of a life of prostitution. He does so by reminding her of her value, by telling her that she doesn’t have to live this way, that someone is there to love and care for her, and she can walk away knowing that someone’s arms will be permanently there for her. These might be my favourite bit of lyrics,
“I love you since I knew you, I wouldn’t talk down to you
I have to tell you just how I feel, I won’t share you with another boy
I know my mind is made up, So put away your make up…
You don’t have to put on that red light…”
By showing her a greater love, he doesn’t judge, but welcomes her into a new story, a new way, a better way.

John 8 is the dialogue between Jesus and Pharisees who are about to judge a woman caught in adultery. Jesus asks them to throw the first stone…only if…of course, they have no record of sin in their life. After the famous drawing in the sand, Jesus tells gives the woman a new lease on life when he says, “Go and sin no more”. Up until then she didn’t know she could something else or be known for something else, but Jesus offers her another story to live – his story. In John 4 we read about another woman, this time a Samaritan woman who Jesus encounters at Jacob’s well at noon. It’s important to know that Samaritans and Jews didn’t get along. Samaritan’s were a mixed race, half Jewish, half pagan, descending from the Northern part of Israel. They chose to worship at a different mountain than Jews. Jews worshiped at Mount Zion, Samaritan’s chose Gerazim. Jews didn’t associate with them and were at times afraid of them. Jesus doesn’t only speak to this Samaritan woman, he asks her for a drink (another taboo). She’s there at noon to avoid the crowds. We find out through their dialogue that this woman has had 5 husbands and is now with a man who is not her husband. Jesus points this out to her, but she doesn’t seem to mind or run. It’s almost as if she’d hope that someone would speak truth to her with some kind of love and concern.

For many reasons, this woman thinks that she cannot be part of God’s story: her cultural status, her religious status, and her marital/moral status. However, Jesus, in a way that only he can, includes her with a statement that some might miss as important. He says,“There is coming a say when you will worship the Father…neither here nor there, but only in Spirit and in Truth.” This represents the collision two stories, hers and God’s. Jesus, with a few words, told this woman that no matter where she was from, no matter what she’s done, know matter how she may have been misled, she too can worship GOD, she too can be part of his grand story. Why? because it’s not about location, or culture, or back ground, or denomination, or moral perfection, or right standing, it’s about two things: Spirit & Truth.

We said in week #1 that the scripture often narrows things down for us. Jesus does it here agin. To the woman and to us, Jesus says, you are invited to worship God and be part of his spiritual family, all you have to do is worship in Spirit and in Truth.

Jesus valued her story, he shares God’s grand story, and with that instrumental conversation, he brought the two stories together. 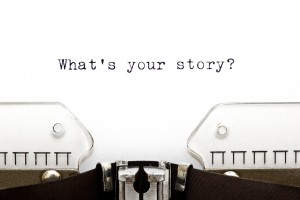 This fall, we are looking at things that we take seriously about our faith in Jesus. Know this – we take stories seriously. Here’s how we put it. We value your story, we value God’s story and we value how those two stories come together. The collision is sometimes easy, while other times it’s difficult; sometimes our stories fit nicely with God’s, other times there are a few sparks in the journey. Either way we know one thing, our stories will always be better when they collide with God’s story.

small(er) group questions: (video summary if you so feel to watch it)

What are some hang ups you’ve had, with your story or God’s story, that have been obstacles for the two to come together, past or present?

Is there a difference when someone speaks the truth in love and with concern or when it comes across in another way, let’s say, with judgment?

How does Jesus challenge to worship in Spirit & Truth speak to the world’s understanding of Religion?

How has your story and God’s connected thus far? Can you give us an example? Any fireworks along the way? Any beautiful moments?