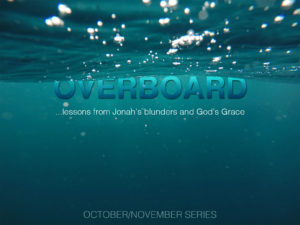 We just scratched the surface of course, walking through verses 1-3.

We learned that Jonah somehow received a word and a mission from God. The mission was to GO to the GREAT city of Nineveh. Jonah doesn’t like this plan, so he runs the other way. He “FLEES” God, his call, and his mission. This does make some sense at the surface, as Nineveh, part of Assyria, were enemies of Israel. Assyria was not kind to Israel, so why would Jonah want to show any love on them?

He hops on a boat to Tarshish: and that’s where we left off…

Ever been involved in a ‘who are you’ conversation? A new friend or acquaintance asks about your work, your hobbies, your cultural background, etc. These conversations can be fun, unless you’re a pastor, like me, then they always seem to be a let down. Mine go like this, So what do you do for a living? ‘Actually, I’m a pastor’ and then the conversation goes south as the other person doesn’t know what to say next. This has happened many times before, and I’m learning to ease into it, but also respond like anyone who has a job, just tell them what it is I do.

As we continue Jonah’s story in chapter one, we find Jonah in this kind of conversation.

Then the Lord sent a great wind on the sea, and such a violent storm arose that the ship threatened to break up. All the sailors were afraid and each cried out to his own god. And they threw the cargo into the sea to lighten the ship. (4-5a)

Note the word GREAT again (it appears 14x in Jonah). The writer is definitely trying to let us, the readers, know that one, the challenges in this book are great, and two, God is greater than whatever we might view as great.

The sailors were scared. A big deal for sure. There is a common understanding that sailors aren’t afraid of anything…well this had them terrified. So much so that they began lightening the load and throwing things overboard.

You know things are intense, on boats, or in life, when we start to throw stuff that we used to view as valuable, overboard. They were necessary at the onset of the journey, but during a storm, they seem less important. Why? Because life is more valuable than stuff.

“Each cried to his own god.”

This tells us a lot about the sailors and a lot about the culture. Pluralism, and more importantly, polytheism, was the vibe of the day, of the ship, of the non-Israelite culture. That said these sailors did pray…they cried out…because trouble and suffering normally lead us to that action or response…no matter who we are. In this case, the prayers were directed at a variety of gods.

But Jonah had gone below deck, where he lay down and fell into a deep sleep. The captain went to him and said, “How can you sleep? Get up and call on your god! Maybe he will take notice of us so that we will not perish.” (5b-6)

How can Jonah sleep at a time like this? C’mon Jonah, you should know better than that. Anyone else able to sleep during what others deem an important or intense moment? I mean, to be transparent, I have fallen asleep on my wife talking a number of times. Late at night of course. I’m not proud of this, but it has happened.

Jonah is SLEEPING, which also means he’s not PRAYING.

The PAGAN captain challenges Jonah to pray. “Maybe you’re god will help us.”

I remember visiting a neighbour in the hospital after they’d been rushed via ambulance. They were Hindi neighbours. I asked if it would be ok to pray, and they said, “sure, it wouldn’t hurt.” Their thinking was, why not? maybe your god can help us? A pretty normal response if you ask me.

This story does tell us that God seems to be in, and at work with our ‘maybes.’ A subtle inclusion, but an important one for sure.

Then the sailors said to each other, “Come, let us cast lots to find out who is responsible for this calamity.” They cast lots and the lot fell on Jonah. (7)

More chance and more maybes. It worked here, as Jonah was the ONE. But how must Jonah have been feeling inside, knowing that he was the one who caused this, before any lot was cast.

So they asked him, “Tell us, who is responsible for making all this trouble for us? What kind of work do you do? Where do you come from? What is your country? From what people are you?”  He answered, “I am a Hebrew and I worship the Lord, the God of heaven, who made the sea and the dry land.”
This terrified them and they asked, “What have you done?” (They knew he was running away from the Lord, because he had already told them so.) (8-10)

Here come the 20 questions. Actually only 5. And who would blame these sailors? They wanted to get to the bottom of this.

5 questions (regarding his purpose, his place, his race) from the Sailors.
2 answers from Jonah.

They want to know who Jonah is, he tells them whose he is.

To know who you are is to know what you’ve given yourself to, what controls you, moves you, inspires you – what and who you fundamentally trust. (Brown)

Jonah, even in his broken and disobedient state, comes back to whose he is – YAHWEH / GOD’s.

The sea was getting rougher and rougher. So they asked him, “What should we do to you to make the sea calm down for us?”
“Pick me up and throw me into the sea,” he replied, “and it will become calm. I know that it is my fault that this great storm has come upon you.” (11-12)

Here is Jonah’s best moment in chapter 1: Admission. Confession. Owning up to his failure. “It’s me” “It’s my fault” “I did it” “I got us here”

Can we just say that it’s never worth not fessing up to your mistakes…ever. It doesn’t look good on you & it doesn’t help the situation. Most people know it’s your fault and are waiting for you to say something.

Instead, the men did their best to row back to land. But they could not, for the sea grew even wilder than before. Then they cried out to the Lord, “Please, Lord, do not let us die for taking this man’s life. Do not hold us accountable for killing an innocent man, for you, Lord, have done as you pleased.” Then they took Jonah and threw him overboard, and the raging sea grew calm. At this the men greatly feared the Lord, and they offered a sacrifice to the Lord and made vows to him. (13-16)

The sailors even try to get Jonah back to land, but it’s simply impossible. How honourable is that? They eventually have no choice but to throw him overboard (hence our series title). They pray, they make a sacrifice to God, and they hope for the best. They went from praying to a variety of gods, to praying to the one true GOD. Quite amazing turn of events.

We’ll find out what happened to Jonah next week. For now, let’s end with a few take home thoughts.

If you were asked to respond to those 5 questions, what would you say? How do you or would you like to describe yourself? How does 1 Peter 3:15 help us or challenge us?

What’s your reaction to a storm? Why might staying awake through it be a better choice than sleeping through it?

Can you think of a time when you waited to admit a wrong, and it didn’t end well for you or anyone involved? How does the discipline of confession to God, and well discerned confession to others make us better?

When we pray, what leads us to pray to GOD, and not just ‘a god’? How does Jesus’ life and teaching help us here? Maybe The Lord’s prayer can help us, and maybe it is a good way to end our discussion and time together.