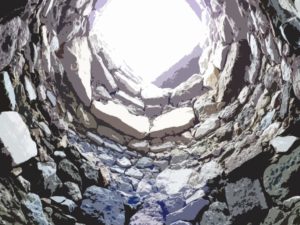 What does it mean to hit Rock-bottom?

You may have felt this in your life, seen this reality in others, observed it on film or in books. It’s never fun, it’s never easy, it’s never desirable…

One thing we know about the bottom…of a pool, a cave, a sea, a circumstance…the only direction once you get there is up.

JK Rowling, in a commencement speech at Harvard, looked back to her life and struggles. She said there was a point in her life where she had, “failed on an epic scale. An exceptionally short lived marriage had imploded, and I was jobless, a lone parent, and as poor as it is possible to be in modern Britain without being homeless. But…I began to direct all my energy into finishing the only work that mattered to me. Had I really succeeded at anything else, I might never have found the determination to succeed in the one arena, writing, in which I believed I truly belonged.” In short, she said, her success was built on her failures.

We’re walking through a story about someone who has brought his troubles onto himself. Jonah has no one to blame but himself for the predicament he finds himself in – for the bottom he now resides in.

We left the story off with Jonah on a boat…actually, he was just being thrown off the boat.

Up to this point…

We’ve learned so far that…

And here we are…Jonah thrown overboard – picture it. If this was an old school TV series that you actually have to wait until the following week to see the outcome, we’d have left things with Jonah half way down the boat, almost in the water, with much anticipation as to what happens next.

Now the Lord provided a huge fish to swallow Jonah, and Jonah was in the belly of the fish three days and three nights. 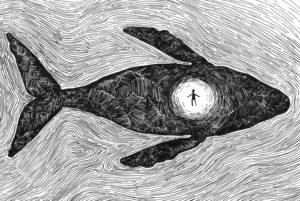 We go from a scene on a boat, then off a boat, to a man being swallowed by a fish, not dying, but stuck there for 3 days.

This is both the best part of the story and the hardest to believe. This is where people who know the story, but don’t necessarily have faith get stuck. And of course they would, it’s normal. A man, swallowed by a fish, lives to tell the story. Seriously?

God ‘provided’ a great/huge fish. Provided is also an important word. We can use the word ‘sent’ or ‘appointed’ here as well. If so, that means that God ‘sent’ the fish?

Dagon, a word worth mentioning here, was a pagan god, a popular Semitic-fish-god among the Philistines. The Hebrew word for fish is Dag. Knowing this, some might say that God is using another nation’s idol/god as a tool for his bidding. Someone else’s god as Yahweh’s tool?

If you take this story literally or not, the writer wants you to know that God can and will use whatever he wants, to surround you, envelop you, and protect you.

Verse 10 says, “And the Lord commanded the fish, and it vomited Jonah onto dry land.”

The fish took Jonah from the point in which he was thrown overboard and eventually led him to the dry land.

Of course God could’ve used anything, but his vehicle of choice was the fish.

(old joke warning) You heard the one about the guy that made it to heaven after unfortunately drowning. When he arrived, Peter asked him why he’s there so early. He didn’t expect him for another few years. The man said that God never saved him. What? Peter said. Ya, I was waiting and he never came? Are you sure? said Peter. Yes, said the man. A person on a canoe came by, a person on a ship came by, and finally a person on a little dingy came by. And? Said Peter. The man said, I told them to keep going, cause I was waiting for God to help me.

The Fish transported Jonah, but it also transformed Jonah. How? We’ll see next as we read Jonah’s prayer.

We’re told that while in the FISH, Jonah prays and reflects.

He’s compelled to pray.
He’s forced to reflect.
He uses his three days of solitude well.

From inside the fish Jonah prayed to the Lord his God. 2 He said:
“In my distress I called to the Lord,
and he answered me.
From deep in the realm of the dead I called for help,
and you listened to my cry.
3 You hurled me into the depths,
into the very heart of the seas,
and the currents swirled about me;
all your waves and breakers
swept over me.
4 I said, ‘I have been banished
from your sight;
yet I will look again
toward your holy temple.’
5 The engulfing waters threatened me,
the deep surrounded me;
seaweed was wrapped around my head.
6 To the roots of the mountains I sank down;
the earth beneath barred me in forever.
But you, Lord my God,
brought my life up from the pit.
7 “When my life was ebbing away,
I remembered you, Lord,
and my prayer rose to you,
to your holy temple.
8 “Those who cling to worthless idols
turn away from God’s love for them.
9 But I, with shouts of grateful praise,
will sacrifice to you.
What I have vowed I will make good.
I will say, ‘Salvation comes from the Lord.’”

It’s here where we get into Jonah’s heart and mind. Through this prayer he reveals what he was feeling, how low he felt, how dark things looked, how desperate he was.

But you, Lord…brought me up…

These words come up in scripture A LOT. When the characters and people we read about look back on their life, it seems like they often say, “BUT GOD” came through. BUT GOD healed me. BUT GOD saved me. BUT GOD helped me, led me, protected me, filled me up, over and over again.

What would our prayer look like? Or would we waste our time in the belly of that fish?

Do you ever look at the feature on your i-phone that says how much social media or internet time/percentage you use? It really makes you wonder how you get anything done if we waste so much time on this stuff.

Walking downtown in our city…everyone around you is…on their phone…while walking. Instead of taking the time to reflect, think, even pray, we are occupied by the little technological advancement called the smart phone.

Love this recent tweet…have you seen it?

I saw a guy at Starbucks today.
No iPhone.
No tablet.
No laptop.
He just sat there.
Drinking coffee.
Like a Psychopath.

If the fish and the three days did anything, it brought Jonah to prayer & reflection.

May we use our “FISH” time as well. May we use dead time to reflect and imagine and create and pray.

The Fish was God’s grace for a prophet who is bad at his job. Of course Jonah doesn’t deserve it, but neither do any of us.

If we let him, even though we are broken and flawed, God will work in us, with us, for us, and through us.

Are you open to a fishy idea from God to help get you on your feet again and moving in the right direction?

I sure hope so.

God will use what he wants, to transform and transport us.

The bottom doesn’t have to be the end. It can be the middle of your story. Be there long enough to learn, but let God pull you up and out of the deep and dark place.

The Fish plays a part in this story, but the main actors are always God and us, and the main purpose is always grace and mission.

Let’s talk about the big elephant in the room…or the big fish rather. Is this an obstacle for you or simply a mysterious part of the story?

Literally or not, the fish is a metaphor for protection, transportation and transformation. How has God been that for you (protection/haven) or done that for you (transport & transform) in recent years? Or maybe you need him to do this for you this season?

How do transportation & transformation work together? God bringing us some where to change us…or…God changing us to eventually bring us somewhere?

Prayer takes up all of chapter 2.
– Anything about this prayer that speaks to you? That challenges you?
– Do we take advantage of space and time in our life to pray and reflect? Share some ideas. Share some new steps you may like to take towards this.
– Jonah comes to terms with a few things in this prayer: failure, mistakes, disobedience, God’s grace, and more. How does prayer do that for us? How does conversation with God help us understand ourselves, others and God more?