In last week’s conversation we felt like we hit a sweet spot…a bit of a nerve. You can check out the full recap (here). I’m guessing this is because many of us may be tired or burdened. Well of course we are…life is filled with heaviness and energy sucking activities.

(Anyone shut their phone off more, not sleep with it, finish work earlier or on time, etc?) 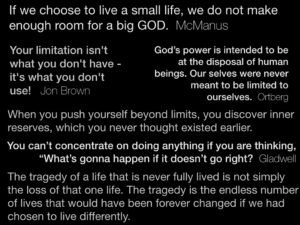 Both Matthew 11 & Genesis 2, the texts we looked at last week, reflect a balance to this equation: Rest & Work. Sit & Serve. Fill-up & Spill out.

Jesus’ words about his yoke, help us see this balance. After all, a yoke is a tool to work efficiently and effectively. And the creation story is a story of creative work, followed by holy and blessed rest.

This is (or should be) our pattern: We work, we run, we influence, we produce, and then we pause, we sabbath, we rest…so we can get back to doing what God has called us to do.

Jesus, in his ministry, showed us time and again, that when he retreated, he emerged ready to serve, to heal, to teach, to do the impossible and change the world.

On this side of the Limit-Less coin…in this mode…in our work, in our calling, in our dreams…don’t let anyone or anything stop you from doing and achieving your good work.

ALL THINGS
NOTHING WILL LIMIT or STOP me from doing what God has called me to do. RUN like you wanna win.

In Romans 8:37-39, we read Paul’s own inspiration for this drive…
…in all these things we are more than conquerors through him who loved us. For I am convinced that neither death nor life, neither angels nor demons, neither the present nor the future, nor any powers, neither height nor depth, nor anything else in all creation, will be able to separate us from the love of God that is in Christ Jesus our Lord.

The question is…
Who put a lid on your calling?
Who dropped an obstacle in your path?
What happened that made you think you couldn’t or shouldn’t or wouldn’t?

Maybe this OT story will help us here.

Leading up to chapter 16 we see that…
– Israel had wanted a king like the other nations. A king that wasn’t God. They begged God for this.
– God said ‘fine, I’ll give you Saul’
– Saul does not turn out to be good. He gets things wrong at every turn. Never realizing that leading God’s people is different than leading other nations.
– And the Lord regretted that he had made Saul king over Israel. (these words end chapter 15)

From there we reach chapter 16.

The Lord said to Samuel, “How long will you mourn for Saul, since I have rejected him as king over Israel? Fill your horn with oil and be on your way; I am sending you to Jesse of Bethlehem. I have chosen one of his sons to be king.”
2 But Samuel said, “How can I go? If Saul hears about it, he will kill me.”

The Lord said, “Take a heifer with you and say, ‘I have come to sacrifice to the Lord.’ 3 Invite Jesse to the sacrifice, and I will show you what to do. You are to anoint for me the one I indicate.”
4 Samuel did what the Lord said. When he arrived at Bethlehem, the elders of the town trembled when they met him. They asked, “Do you come in peace?”
5 Samuel replied, “Yes, in peace; I have come to sacrifice to the Lord. Consecrate yourselves and come to the sacrifice with me.” Then he consecrated Jesse and his sons and invited them to the sacrifice.
6 When they arrived, Samuel saw Eliab and thought, “Surely the Lord’s anointed stands here before the Lord.”
7 But the Lord said to Samuel, “Do not consider his appearance or his height, for I have rejected him. The Lord does not look at the things people look at. People look at the outward appearance, but the Lord looks at the heart.”

12 So he sent for him and had him brought in. He was glowing with health and had a fine appearance and handsome features.
Then the Lord said, “Rise and anoint him; this is the one.”
13 So Samuel took the horn of oil and anointed him in the presence of his brothers, and from that day on the Spirit of the Lord came powerfully upon David.

The beginnings of the story of King David is profound. To think that because of Age, Ability, Height, Time, he could’ve been overlooked. But God wouldn’t let that happen. To him…or to you.

What is limiting you? What’s in your way? What have you allowed to block you?

If we let every obstacle or limit control our destiny, we wouldn’t do or achieve anything.

God does not put limits on us, he takes them off.
God doesn’t put a lid on us, he removes it.
God says, you can do this. You can achieve this. You are called to this. I’ll put my Spirit on you, and you can walk forward in confidence.

Will you balance last week’s Rest with this week’s Run? Stop with Go? Asleep with Awake? Limits with No-Limits? Boundaries with Boundless possibilities?

Let these words from Jesus be your final word: