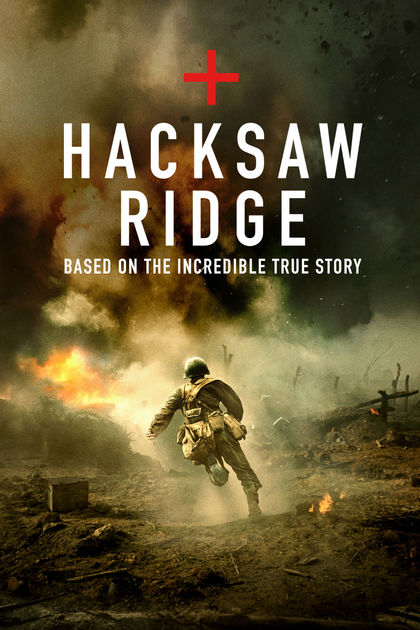 The movie starts with these words from scripture… (Isaiah 40) “The Lord is the everlasting God…he will not grow tired…gives strength to the weary…increases the power of the week…but those who hope in the Lord will renew their strength…they will soar…run…walk.”

We’re invited into the playful relationship with Desmond’s brother, loving relationship with his mother, and difficult one with his father.
– His mom is seen as a wonderful woman
– His Dad is a war veteran still living with the effects of his time at war…alcoholic…hates himself and takes it out on others…
– He loves his brother, though almost killed him in a play fighting accident. This is one of the things that shapes his views on fighting and killing.

While in this crisis with his brother, we see Desmond looking at a poster in his house with both the Lord’s Prayer and the 10 commandments, focusing on commandment #6, Do not Kill.

Demond seemed to always have compassion for others. While cleaning the church windows, he hears a noise, rushes out to see, and help, as someone was struck by a car. He saves his life and this starts his interest in medicine.
– This also leads him to meeting his future wife, Dorthy.
– He goes home and tells his family, “I met someone today, Dorthy, she’s gonna be my wife.”

This is of course the years of WW2. Americans are enlisting to war. Desmond’s brother enlisted. And Desmond, makes the choice to enlist as well.
– one problem, he is a conscientious objector to violence, a pacifist, an abstainer to guns and killing
– he signs up as a medic
– problem two, they send him to a rifle company/training centre for front line soldiers

Desmond goes to military training with a bible in hand. Not because he believes in war, but because he believes he can make a difference, without fighting. His dad warns him that this war isn’t going to fit into his thinking and values…“You have to pray about everything, and war doesn’t give you that option.”

Military Camp is not pleasant for Desmond. Some of the soldiers and lieutenants abuse and mistreat him. This of course is because of his faith and values. The others are told, “Do not look to Dos to save you on the battle field, as he’ll be struggling with his conscious”

In conversation with the Psychiatrist Dos says…“I’m not crazy sir”. I just simply believe what I believe. “God says not to kill” and “Jesus said, a new commandment I give unto you, to love one another.”

Doss ends up in prison for a few days, as they wait to give him a trial, and attempt to send him home. He missed his wedding because they didn’t let him go home for the weekend. His lieutenant brings his fiancé to him, to try and convince him to give up this foolishness.

This conversation unfolds… “I don’t know how I can live with myself if I don’t stay true to what I believe…or how you can live with me…I’d never be the man I wanna be in your eyes.”

During his Trial, Desmond’s Father brings the leading officer/judge a letter reminding them of the constitution; a constitution that was written to give people freedom of choice. Desmond wins the trial, is allowed to go back to the army, and the story leads us to Okinawa, Japan, and the battle on Hacksaw Ridge. His parting sentence? You are free to enter into the hell fire of war without a single weapon to protect yourself.

What proceeds to happen in the final 45 min of the movie is one of the greatest acts of courage & conviction you’ll ever see.

Desmond, true to his values, does not use a weapon, but proceeds to risk his life to save the life of others.

After a day of fighting, when the surviving soldiers leave the Ridge to go back to camp, Desmond stays, and going back and forth, bringing wounded soldiers again and again, lowering them down to camp to be cared for. During this time he ask’s God, ‘what do you want from me?’ Then hears the cries of his brothers, and knows what to do – help them.

He helped more than 75 soldiers that night.

His Lieutenant said these words to him…“All I saw was a skinny kid. I didn’t know who you were. You did more than any kind of man has done in the service of this country. I hope one day you can forgive me.”

AND… “Let’s get this soldier to a hospital bed”. This is significant, as earlier in the story, Doss tells that same lieutenant, “While everybody else is taking lives, I wanna be saving it…With the world set on tearing itself a part, it doesn’t seem like a bad idea to put it back together.” He was laughed at a criticized – now he’s called a solider.

Decide how you want to be known and who you are…you have nothing else.

Have an answer for everyone who asks about the hope & faith you have.
1 Peter 3:13-15. Who is going to harm you if you are eager to do good? But even if you should suffer for what is right, you are blessed. “Do not fear their threats; do not be frightened.” But in your hearts revere Christ as Lord. Always be prepared to give an answer to everyone who asks you to give the reason for the hope that you have. But do this with gentleness and respect…

Peace, and non-violent confrontation, even in the midst of impossible situations, is valuable and life changing/saving.
Isaiah 2:4, Micah 4:3 They will beat their swords into plowshares, And their spears into pruning shears. Nation will not lift up sword against nation, Nor will they learn war anymore.

We heard some really good questions and comments following our conversation. Some highlights…
– Why do we have to wait for someone like Doss to save 75 people before we can appreciate his values and principals?
– War movies are always about the one with the most guns while this story is about the guy with no guns or weapons.
– All we can do is help one person at a time and leave the results up to God.