Inspired by the story of PT Barnum
Situated in the mid 1800’s…
The story is a recapturing of how the Circus came to be. In actuality, it’s the story that leads to the Ringling Bros. and Barnum & Bailey Circus, which ran uninterrupted for 146 years until it’s closing last year.

This is partly a true invite, and also a way to sidetrack the viewer, you, and me, from initially identifying what the greatest show actually is.

Before we say anything else, know that this movie is “inspired” by the story of PT Barnum and events around his life. It’s not a true life description or telling. There is much liberty taken in this movie. But that’s ok. And here’s why. The writers are using the inspiration of Barnum’s life to tell us some things about dreams, ambition, values, community, humanity, and much more.

Barnum came from very little. His Father was a tailor who worked at wealthy families home, one home being the home of Charity, a little girl who Barnum became best friends with, and eventually married.

One of the main songs running through the film is “A million dreams”. Very important, as Barnum thinks the world should be better.

As a young adult, Barnum goes to Charity’s house to ask for her hand in marriage. Her Father let’s her go, but not without warning Barnum… “Sooner or Later she’ll tire of your life, of having nothing, and she’ll be back.”  This is a prominent theme in the movie, rich vs poor, elite vs peasant, gifted vs unique…and how the world needs to change in how they separate & divide people. This also plays out in a scene with Phillip Carlyle & Anne Wheeler. 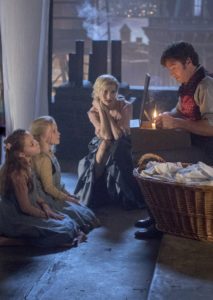 Fast forward to Barnum & Charity being married with two young girls of their own. Barmun’s work company goes bankrupt. As bad as this is, it inspires and challenges Barnum to dream again. And dream he does.

He begins to envision a place where people’s uniqueness is celebrated, a place to show off our differences and our gifts. This venture/vision, even though it eventually takes off, is criticized and protested. One of the words used to criticize this show was ‘CIRCUS’. Barnum loved it, and used it in his new title of the show.

The interesting thing is that even though Barnum believed in the uniqueness of everyone, he was tempted to be like everyone else and to be loved by everyone else. This led him away from the circus and his family for a short time to run a tour for an opera singer. He was fooled to think that prooving himself to the elite and wealthy would bring him happiness.

Barnum was beginning to lose his way, but his family, his circus community, and I think, his convictions, helped him find it again.

Something tragic happens to his building. A fire. Horrible. Like most traggic things in life, they lead to questions that bring perspective and purpose.

The fire actually did lead to an outstanding idea. “We don’t need a building…we can house this in a tent”

The movie ends with the song, This is the greatest show, but by then we realize that the greatest show isn’t the show you put on for others, it’s the relationships you build with others along with way. It’s the inspiration we give to others, the love, the encouragement, the care we give and share with those around us, in our community. In the final minutes we see Barnum walking off stage, handing his baton & hat to Carlyle (literally and symbolically) then goes to watch his greatest show, his kids ballet recital.

Are you the person you want to be or have you gotten caught up in someone else’s aspirations and false hopes?

Do we appreciate others, for who they are, not who we want them to be? Do we see the humanity, the image of God, that connects all of us.

What’s your sense of home?

Does your life project a sense of home onto others? Do they feel at home when you’re around?

Psalm 84:2-4
My soul yearns, even faints,
for the courts of the Lord;
my heart and my flesh cry out
for the living God.
Even the sparrow has found a home,
and the swallow a nest for herself,
where she may have her young—
a place near your altar,
Lord Almighty, my King and my God.
Blessed are those who dwell in your house;
they are ever praising you.

Who is great? In who’s eyes? Such an important question to ask ourselves.

Early in the movie we were shown that the poor are often the most generous (Phineas was trying to steal food and the disfigured woman gave him an apple while the vendor in the market chased him down for trying to take a loaf of bread) a small part but a huge message…the woman…disfigured, hidden by her cape, shunned by society was GREAT in the eyes of a hungry orphan boy.

This movie is all about celebrating uniqueness.

All kinds, colours, gifts are really a celebration of humanity. It wasn’t a “freak show”… it was people working together for a common goal.

The body of Christ is unity amidst diversity. Everyone is “home” when they BELONG.

We don’t need a building, we just need a message that changes lives. Barnum wanted the circus show to bring happiness to people….to celebrate people!

OUR (the church’s) message is Jesus…a message of hope and love to lost people.

The passing of the top hat at the end was key…it takes a village. Everyone contributed to the success of the circus…everyone brought something different to the table…everyone made it HOME. They respected each other and appreciated each other’s gifts. They passed the hat with confidence and purpose. No one tried to stop the hat or take ownership…they kept up the passing until it reached Phillip Carlisle…the natural new leader with the gifting to do the job. They ALL celebrated in the moment.