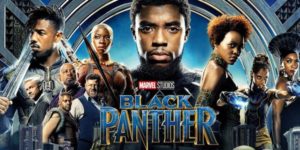 Our Third & Final movie of this July series is Black Panther…

Black Panther, the character, originated in 1966, in a Marvel comic featuring the Fantastic 4. It was issue #52.

Think about it. Why 1966? These are the years of MLK, John Lewis and the civil rights movement. This was Marvel’s way to speak into the climate of the day. (on purpose or by accident). One might say that it’s just animation, or just a comic book character. Others might say it was a very clever way to invite a new audience to Marvel and speak into a broken culture in some helpful way.

The story is about a people in a third world African country called, Wakanda.

To the world, they are considered impoverished, but that is only their front. Beneath the surface, they are an advanced society in resource, technology, and more. This is all because of something called Vibranium.

They recognized what they discovered, and how their way of life contrasts the rest of the world. So what did they do? Hide it. Conceal it. Protect it.

Some background is given. King T’Chaka’s brother was sent to the US as a spy. He didn’t do too well. Instead of observing and fitting in, he was influenced by the ways of “the world”. He sold Vibranium to someone who wanted to use it for ill. King T’Chaka comes to visit, confronts him, and in the process we discover that another spy was planted, this causes the King’s brother to react, and in this conflict, the brother is killed. Sad. For him…and his son that is left behind in poor Oakland neighbourhood.

We fast forward. King T’Chaka, is now passed, due to an accident at a United Nations meeting (Marvel story). T’Challa, his son, must now become the new King of this nation.

We learn that T’Challa is a good man; a peaceful man. He is opposite of the ways of the world. He doesn’t want to wage war on others, and is able to change and see things differently than even his ancestors did.

There is a beautiful exchange in the movie between T’Challa & his father. “You’re a good man, with a good heart, and it’s hard for a good man to be King”

The villain in this movie is Erik (or Killmonger), the boy left behind by the King T’Chaka. His circumstance, his suffering, his past, drives him to revenge. This is something both T’Challa and the people have to deal with as it forces them to face a reality they don’t like – their former King, even though his intentions were good, made a bad decision – he chose protection over care – he chose to leave his nephew to protect his people. T’Challa must be different.

The dilemma or problem to be solved in Black Panther is this:

I don’t wanna give too much of the story away, plus there’s too much in this story line to share in this format. I will say that this story ends so well.

What do we do with what we’ve been entrusted with?

3 ethics reflected in this story

The viewer is faced with a decision…what ethic will you live by?

This concludes our series in movies this year. Hope you enjoyed it. Each movie had something different to offer. Thank you for engaging with us and allowing us to take a different approach this month. Also, a big thanks to Wes Peel, Cheryl Romeril, and Renz Laserna, for participating in each of these conversations. They added so much to this series.