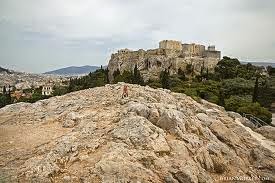 As we arrive to Acts 17 we’ve seen so much happen. One thing that has yet to occur though is Paul teaching in front of a fully pagan crowd. By pagan we mean that none of them would be Jewish or God-fearers (people who were intrigued with and followed God’s story). The scene on Marz Hill (The Areopagus) is tense and exciting. Athens is a city filled with ‘g’ods, idols, and men who love new ideas. One thing they weren’t aware of was the Resurrected Jesus. Actually, they knew so little of him that when Paul spoke of Jesus and the Resurrection, they thought he was talking about two new gods, a male one in Jesus and a female one in Resurrection (word in Greek is connected to the word Anastasia). Even though they were confused, they were intrigued.

Paul is invited to explain his ideas a little further among philosophers and thinkers. What comes next is an eloquent teaching about the one God, God the Father, Creator, Ruler, Judge, and of course (the resurrected) Jesus who was and is God in the flesh. What’s amazing is how Paul goes about his talk. He starts with a common ground: spirituality. The Greeks were very spiritual, they just weren’t very aware of…well…God. We see that lots today don’t we? People are are intrigued with spirituality, but are looking in the wrong places for the God who fulfills our spiritual longing. Paul identifies in the Greeks a longing for something more; something bigger than themselves. They worship ‘unknown gods’, and Paul sees this and invites them to know their creator, God.

When you read this story, you come at it from two different perspectives: One is the side of the Greek’s, the other is the ‘already’ Christ-Follower who is learning from Paul’s approach to sharing the Gospel.

If you’re the person, in the midst of a culture, full of idols, but still searching for more, this talk on Marz Hill should totally intrigue you. You don’t have to follow ‘made-up’ gods. You don’t have to settle for second rate deities. You can find hope and truth in the ONE God – in Jesus, the resurrected one. Small ‘g’ gods let you down. Here’s why? We made them up. We created them. We deem them worthy, even through they aren’t. Think about this: what’s your idol? What do you give ‘worth’ to? In 2014 we might not view idols in the same way. Actually, we don’t. But if we take a good look, we’ll see them all around us: our cars, our money, our houses, our stuff, etc. The challenge to you is…follow the true God. Follow Jesus. He’s the resurrected one, the creator, the ruler, the lover of our soul. He is a God who is BIG, yet at the same time very close.

If you’re already a follower of Jesus and wondering how you can introduce people to their creator, this is a great example that Luke & Paul give us. Paul’s talk was most definitely longer, but Luke (the writer of Acts) wants us to get enough of it to see the mastery of Paul’s ways. He doesn’t start with God, he starts with culture and ends up at God. He starts low and leads them up. Too often, the church has been accused of throwing the Bible in people’s faces. Rightfully so. We should learn from Paul and discover how to preach ‘to the word’ and just just ‘from the word’. You know the difference don’t you? The moments when you felt like the ‘preacher’ assumed you knew what he/she knew. Perhaps you even felt a little (or a lot) judged. This is when the one communicating the gospel assumes you know what they are talking about and where they’re coming from. In the former places in Acts, Paul is at least working with people who knew something of the story. It may not be the Jesus story, but it was at least the God-story of Israel. In Athens Paul’s audience is very different. Jesus & the Resurrection was truly a ‘new’ idea.

So read this text/story as you wish: as one who is new to the journey, or as one who needs some help in how to invite others to walk along side you. As always, let the story read you too.

This story begins with Paul waiting in Athens for his
friends to join him. Can you think of an experience when something significant happened
while you were waiting? (optional)
Athens was known for having lots of idols. Someone called it
a forest of idols. Durham wouldn’t be popular for the same bit of info would
it?
How would detect or define idols today? In our cities? In
our culture? Or is that even a worthwhile question to be asking?
Why do you think Paul’s message of Jesus being the only way
to the only God is hard to accept by some?
(Maybe Read Deut 6:4-5 & Mark 12:29-31)
This is the crux of what Paul is saying in Acts 17…what
resonates with you most? What causes some questions?
24 “The God who made the world and everything
in it is the Lord of heaven and earth and does not live in temples built
by human hands. 25 And he is not served by human
hands, as if he needed anything. Rather, he himself gives everyone life and
breath and everything else. 26 From one man he made
all the nations, that they should inhabit the whole earth; and he marked out
their appointed times in history and the boundaries of their lands. 27 God
did this so that they would seek him and perhaps reach out for him and find
him, though he is not far from any one of us. 28 ‘For
in him we live and move and have our being.’[b] As some of your own poets
have said, ‘We are his offspring.’[c]
29 “Therefore since we are God’s offspring…
God asks that we worship him only. But as we do, all other
things fall into their right place & perspective. What can you add or say
to that?