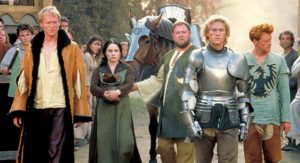 Have you ever seen the movie, A Night’s Tale? It was (the late) Heath Ledger’s first big introduction to the movie world. Set in Medieval times, Ledger plays the peasant born William Thatcher who, against all odds, climbs up the competitive jousting ranks.

One scene always stood out to me: there is a romance developing between William and a certain fair maiden. He’s trying to communicate to her that he cares for her and asks what it will take. Her response? Lose for me. If you lose your jousting match, you’ll win my heart. WHAT??? He says no and storms out. Fast forward to the next scene and you’ll find William losing his matches willingly. His friends are perplexed and mad and ask why he’s doing this? His only response, “I love her”.

This is ridiculous isn’t it? Really? Is there any other way to show your loyalty? How about WINNING? I’ll win for you.

Here we are again – in the Beatitudes, where things are reversed – principals seem to be backwards – down means up and up means down. Losing is winning and winning isn’t what you think it is.

Jesus…is this really the way things are?

The Beatitudes reflect a reverse way of moving forward as well as anything else Jesus said.

“If you wanna be where others can’t get to, you have to do things differently than others are doing.”

Happy are…Blessed are…the poor? The grieving? The hungry? The meek?

What make’s more sense in our society and culture is to say…Blessed are the Rich, the settled, the filled, the powerful, the winners, the strong, the successful.

Jesus has something else in mind. This message to those listening (and to us) is good news. It’s the gospel in 8 simple lines.

“Blessed are the meek,
for they will inherit the earth.”

Or as The Message paraphrases it, “You’re blessed when you’re content with just who you are—no more, no less. That’s the moment you find yourselves proud owners of everything that can’t be bought.”

Every week we’ve started with asking this very important question…What is Jesus talking about…what is he possibly saying?

He’s not implying what Charles Barkley means by this beatitude…The legendary Basket Ball player turned announcer used to say “The meek may inherit the earth, but they won’t get the ball from me”

Sorry…back to Jesus – What is he trying to tell us?

There are two people the scriptures attribute meekness to: MOSES & JESUS. Interesting. (More on that below)

1) Blessed are those who find themselves in a really low state of affairs! POSITION!

Let me remind you who is in this crowd. Broken people. Persecuted people. Disciples who gave up everything to follow Jesus and are living out their faith, even when things get difficult. You also have people who are coming to listen to Jesus that are at the end of their rope. They reflect the first meaning of meekness: a low state, below the standard, not quite where they wish to be, behind the 8 ball.

Think of the person who has to leave everything they have in hopes of a better life, but have to start at the bottom, again. They would be categorized as meek in their position.

In this case, this Beatitude is for those in an awful situation who lack the power to do anything about it…but with great humility accept the invitation to carry on.

This brings us to Moses. The first person the scriptures attribute meekness to. We find this in Numbers 12:3 “Now Moses was a very humble man, more humble than anyone else on the face of the earth.” (NIV) “Now the man Moses was very meek…” (ESV)

I always thought this means exactly as it reads, that Moses was humble and that he was meek. However, the Hebrew word here for meek can also be translated as miserable (only in the OT text). It can actually read that Moses was the most miserable man on the earth.

How is that possible? Well, if you read Numbers 11, you get an idea of how difficult things were getting for Moses. People were complaining, things weren’t going well, his people weren’t co-operating, even his siblings were turning on him. This is the lead up to 12:3.

The other part of this word in the OT, can convey a sense of trust in God and an acceptance to your circumstance.

So…in Moses’ miserable situation, he still trusts God, he still remains faithful, he doesn’t waiver. Things might suck, but he isn’t giving up.

He has no choice but to accept his ‘meekness’ if you will. He’s acknowledging his position. Things are not good.

Now back to the Matthew 5. One of things Jesus is saying is that those who are miserable, those who are doing good, but have things stacked against them, they are the blessed ones. This is not the end of their story…or yours!

What else does this beatitude tells us? (remember there are two things)

2) Blessed are those who choose to be in a low posture, humble & meek…in order to put others first. POSTURE!

Here are some descriptions for the NT word meek…

Paul’s words about Jesus in Philippians 2 might be the best description for meekness that Jesus was trying to get at in the Beatitudes.

“…in humility value others above yourselves,  not looking to your own interests but each of you to the interests of the others.”
In your relationships with one another, have the same mindset as Christ Jesus:
Who, being in very nature God,
did not consider equality with God something to be used to his own advantage;
rather, he made himself nothing
by taking the very nature of a servant,
being made in human likeness.
And being found in appearance as a man,
he humbled himself
by becoming obedient to death—
even death on a cross!” (2:3-8)

This is the epitome of meekness:

This Beatitude is all about lowering rather than elevating…about choosing humility over flexing your muscles.

The difference between Jesus & Moses? Moses was handed his position, Jesus chose his posture. Some get their position handed to them, others choose their posture.

In the first scenario, God says, I am with those who have been dealt a bad hand. In the second, God says, you’re with me because you’ve chosen to live out values of love, humility, mercy, grace, and peace.

Either way – God is on your side!

The question often comes down to this…who gets the prize? The trophy? The Earth? The normal answer would be the winners, the successful, the strong, the popular, the lucky, the dominant ones, the loud mouths.

Not so fast. Jesus shows us a different way; A better way; A redemptive way.

If you’ve been put down while doing good…
If you’re doing good by reaching down…
You’re Blessed!

E. Peterson paraphrases it so well, doesn’t he? “You’re blessed when you’re content with just who you are—no more, no less. That’s the moment you find yourselves proud owners of everything that can’t be bought.”

If you’ve been able to catch 8 Simple Lines from the first week, can you say which Beatitude resonates with you most so far? Blessed are the Poor in Spirit / Blessed are those who Mourn / Blessed are the Meek? Any initial thoughts about our recent Sunday conversations?

We looked at two ways to view this beatitude: Moses (position) & Jesus (posture).
– what does it look like to be stuck, cornered, miserable? how would you describe this position of meekness? What do you think of Moses possibly saying he’s the most miserable man in the world?
– what does it mean to intentionally put yourself in the posture of meekness & humility? Why does this describe Jesus so well?

What do you do when you’re confronted with a situation where strength and arrogance can easily win, but you want to show a better way?